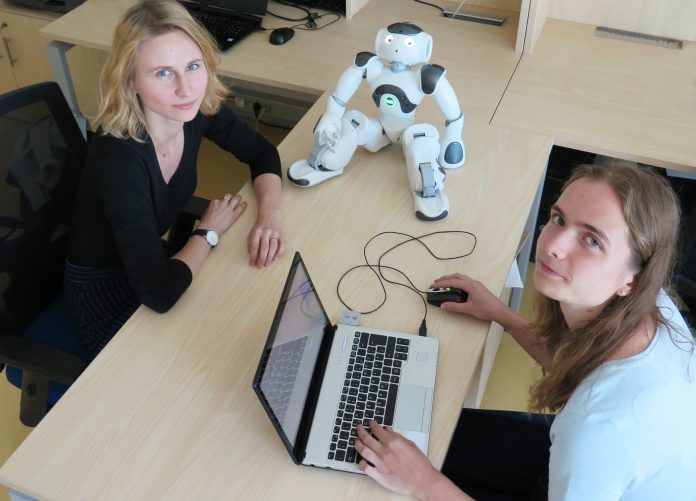 A team of female-programmers from the Czech Institute of Informatics, Robotics and Cybernetics  in Prague is participating in the Robots in Residence programme of the Goethe-Institut together with the newly established RICAIP Centre (Research and Innovation Centre on Advanced Industrial Production). Their task is to program the traveling humanoid robot NAO, which started its journey around Europe a few months ago. At the Goethe-Institut Czech Republic, the general public can meet the robot during September and get a chance to have an interview with it, listen to its EU personalities’ quotes, play a quiz or practice Tai Chi. The exact schedule of the robot’s stay in Prague can be found on the website of the Goethe-Institut Prague: https://www.goethe.de/ins/cz/cs/ver.cfm?fuseaction=events.detail&event_id=21961447&

NAO arrived in Prague from Ljubljana, Slovenia, and after Prague will continue to its next stop in Warsaw. In each country, local creative programmers provide new skills to the NAO robot.

„We were happy to join the project mainly as we have got the opportunity to test the development of communication in natural language on a humanoid robot which is in some way new for us. For research purposes, we have been using Pepper robot for a few past years. We can say that Pepper is an older brother of NAO robot which is being produced by the same company,“  says Gabriela Šejnová from the Robotic Perception Laboratory at CIIRC CTU and adds: „As part of the HUMR project, we teach Pepper to talk to seniors from the Active Age Center 90 and practise its cognitive skills using various quizzes and games.“ Kateřina Kubecová, who is now programming the NAO robot for the Goethe-Institut, confirms: „We will translate a small example of the communication that Pepper already knows into English and German and equip the NAO robot with it.“

The first meeting with the robot and its Czech programmers took place on Wednesday 9 September 2020 as part of a cultural evening in the framework of the project „Tell me about Europe“, which is conceived, among other things, as a meeting with the writer Alena Wagnerová. The project itself, alongside a number of other projects, is presented by the Goethe-Institut and the German Federal Foreign Office during the German EU Council Presidency from July until December 2020.

The Robots-In-Residence programme in the Czech Republic is implemented by the Goethe-Institut in cooperation with RoboticLab at the Technical University of Wildau and the Research and Innovation Centre on Advanced Industrial Production (RICAIP) at CIIRC CTU.

The programme is part of the large-scale project Generation A = Algorithm also organized by the Goethe-Institut at the occasion of the German Presidency of the EU 2020 Council: Goethe.de/generationa. The project combines different formats, in addition to the traveling robot, also online Couch Lessons, a Climate Challenge Hackathon as well as a residency programme, in which the Goethe-Institut invites young artists to stay at various research institutes dealing with artificial intelligence to gain new perspectives on the latest technological developments. The AI-Residence programme is aimed at artists aged 18-30, the so-called Generations Y and Z. RICAIP and CIIRC CTU have been also involved in this activity – it will be implemented only in 2021, but the collection of applications is already underway. Artists will be selected in the fall of this year and can still apply until 30 September 2020 here. The aim is to stimulate public debate on existing approaches, potentials and risks of artificial intelligence in the coming „Generation A“, which is expected to use algorithms in everyday life.