ČVUT CIIRC
Home News The facade of the CIIRC building was awarded for design in Como,... 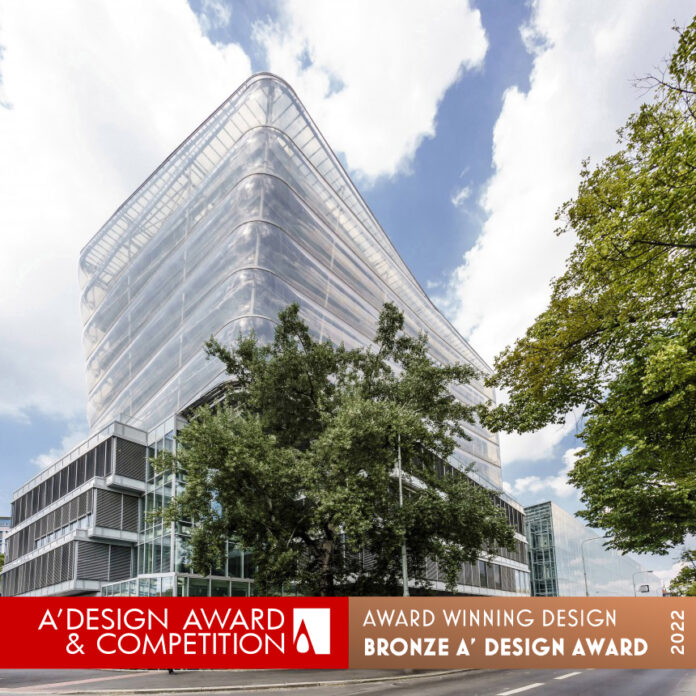 The bronze trophy from the international design competition A‘ Design Award & Competition in the category Architecture, Building and Structure Design 2021 – 2022, which took place in Como, Italy this summer, goes to the unique membrane facade „ETFE Membrane Facade Double Skin Solar Collector“, which the CIIRC CTU building was designed by architect Petr Franta from ARCHITEKTI & ASOC., s.r.o. In 2017, one of the few new and modern university buildings – the building of the Czech Institute of Informatics, Robotics and Cybernetics of the Czech Technical University – was built in the heart of Prague 6 within the Dejvice campus. In particular, its transparent inflatable facade made of membrane foil evokes emotions. This double skin system, where the glass facade of the inner building is covered with foil, acts as a solar collector, thus contributing to lower energy consumption. And it was this „saving and ecological“ function, combined with the high-tech design features of the ČVUT CIIRC building, that won the favor of the expert jury and brought this prestigeous award to its author, Peter Franta.

The ČVUT CIIRC building won its first award back in 2017, when it was declared the best building in the category of new construction by the Architects‘ Association. This year’s bronze from Italy is just another in a series of awards that the building has received here and abroad since its birth.

A‘ Design Award & Competition is an annual international design competition of world importance. Submitted projects are evaluated and anonymously assessed by an expert jury, made up of experienced academics, leading publicists and recognized professionals. The award „A‘ Design Prize“ is intended for the winning designers, which consists of a whole series of sub-prizes (in addition to a special trophy for design, a certificate of excellent design, a logo of the awardee and a yearbook of awarded projects, for example inclusion in the World Design Rankings, and many other prestigious awards).

ETFE foil – an innovative, award-winning facade
For the construction of the ten-storey CTU CIIRC building, a new building element was used for the first time in the Czech Republic for a typological office function: the so-called pneumatic facade formed by aesthetically impressive double transparent ETFE (ethylene-tetrafluoroethylene) membrane. The new cantilevered facade is fully glazed inside, the external facade using ETFE insulating pneumatic membrane foil is suspended on a separate secondary steel structure. The membrane and the triple glazing insulation forms a double acoustic facade and at the same time a solar collector for recuperation of warm air on the highest floors and air distribution. The foil cushions, which are under constant pressure of 300 Pa, are 3 m wide and up to 62 m long, depending on the position in the facade. They wrap around the secondary steel structure diagonally upwards over the corner, at a precisely defined torque. The geometry of the contact between the ø 160 steel profile and the aluminum profile, into which the edges of the ETFE foil cushions are clamped, and the round corner solution, was the biggest challenge in the design of this facade. The internal glass facade is of the raster type, the solid fillings are made of glass – insulating triple glazing, using modern heating and cooling technologies. Outdoor air is drawn into the ventilation units from two places – on the one hand, from the space of the solar collector formed by a double facade between the glass facade and the facade made of ETFE membrane cushions installed in front of it, oriented to the south and southwest for the winter and transitional periods, and from the north facade in the summer. The choice of suction points is controlled by an automatic regulation system depending on the temperature and sunlight of individual facades. For shielding against excessive heating of the interior of the building due to solar radiation in the summer, the area of ​​the double facade is used to place blinds. The excess of excessively warm air in extreme summer temperatures is evacuated through open glass flaps in the glass attic at the highest point of the double facade. The most famous applications of ETFE material on buildings abroad are the Allianz Arena in Germany and the Water Cube in China.

Photo gallery from the award ceremony