ČVUT CIIRC
Home News German Vice-Chancellor Habeck got Acquainted with the Trends in Robotics and Industry... 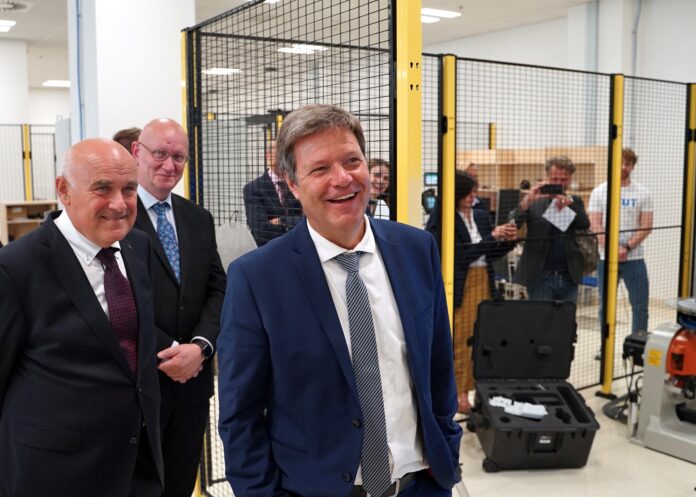 Federal Vice-Chancellor and Minister of Economy and Climate Protection Robert Habeck, on his first trip to the Czech Republic since taking office, visited CIIRC CTU on Monday, 11 July 2022. He got acquainted with concrete examples of research cooperation with industry and with the most modern infrastructure that is available to companies and researchers at CTU as part of the Czech-German RICAIP centre.

Federal Vice-Chancellor and Minister Robert Habeck spent more than two and a half hours at CIIRC CTU. He saw a total of six robotic demonstrators, which are being developed by scientists in cooperation with industrial companies in the experimental laboratory of Testbed for Industry 4.0. The Prague testbed is part of the RICAIP centre, thanks to which it receives a total of CZK 370 million (EUR 15M) just for new technology equipment. Vice-Chancellor Habeck was very interested in the specific setting and focus of cooperation between academia and industry, which has been developed within the testbed. He met with representatives of the companies Škoda Auto, Siemens and T-Mobile, who explained to him the benefits of such cooperation for both parties using concrete examples. 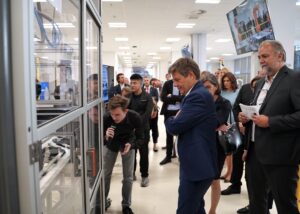 „We tried to show the Vice-Chancellor that the cooperation between our two countries in our institute has a clear form, concrete projects and results,“ said Professor Vladimír Mařík, scientific director of CIIRC CTU. „This is due to the unique technologies that we have literally under one roof, as well as the ever-growing ecosystem of companies, not only Czech or German or just the big ones, but – and this is the main thing – also small and medium-sized enterprises,“ added Mařík. 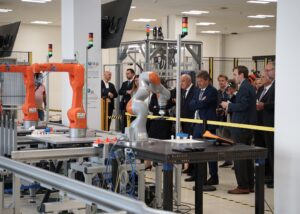 A team of young scientists then presented him with the latest robotics experiments and research facilities. He saw, for example, robotic 3D printing for the precise production of parts. For this purpose, the researchers used a standard industrial robot, which they supplemented with a positioning table for multi-axis additive manufacturing. The accuracy of the applied material, which could be recyclable plastic for example, is measured by a so-called laser tracker and a touch probe. Further development will be carried out in cooperation with Škoda Auto.

Another experiment being developed with Siemens and used to test T-Mobile’s 5G campus network is the Delta robot. It is a five-axis robot that performs tasks with high precision and great speed. Its applicability is mainly in the automotive industry. Because it operates in the industrial 5G network and the edge cloud, the fast transmission of large amounts of data is not a problem. Therefore, artificial intelligence, including computer vision, could be integrated into the robotic system. The operator can demonstrate the desired movements to the robot by navigating with a hand controller, and the neural network will help the robot to refine them. The robot’s behaviour can then be accurately monitored and any deviations from the expected behaviour can be detected.

„RICAIP and testbed is a very concrete example of effective Czech-German scientific and industrial cooperation. Thanks to state-of-the-art technologies and shared know-how, we are involved both in large international projects as well as offering services to small and medium-sized enterprises in the field of digitalization and automation,“ adds Dr. Tilman Becker, Director of the RICAIP Centre.

The Czech-German RICAIP Centre is the largest project in the field of robotics and industrial artificial intelligence, which is jointly financed by the European Union and the Czech Ministry of Education, Youth and Sports in the amount of EUR 48.5 million. (i.e. approx. 1.2 billion CZK) for a period of six years. RICAIP connects industrial testbeds in the Czech Republic, specifically at the CIIRC CTU and CEITEC BUT in Brno, with the testbeds of the German research institutions DFKI and ZeMA in Saarbrücken.

In addition, the CIIRC CTU provided Vice-chancellor’s visit with the facilities for an informal meeting between Minister Habeck and representatives of the Czech media. Also, an open interview between him and Czech TV on current issues of the German and European economy and energy was filmed at CIIRC. Minister Habeck’s visit was the first state visit abroad since the opening of the second phase of Testbed in April 2022. A year ago, German Federal President Frank-Walter Steinmeier and his wife visited the CIIRC and the Testbed as well.