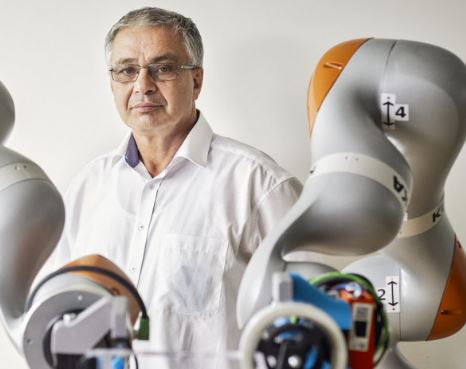 The elections to the Academic Senate of CTU are behind us. We are pleased that Professor Hlaváč has defended his membership in the CTU AS and that our institute will continue to be represented in this self-governing representative body of CTU.

„I would like to thank all my colleagues at CTU who supported me and gave me confidence for the next election period. I appreciate this very much. I will continue to be an active member of the Academic Senate, I will support and organize cooperation with industry, exchange internships for students and other activities,“ Professor Hlaváč commented after his election.

The results of the elections, which took place from Tuesday, November 22 to Friday, November 24, 2022, secretly electronically via the CTU internal application, are as follows:

– in the district of academic workers, 83 (no one abstained) out of 133 (62%) voters voted, the candidates received the following number of votes (sorted by votes) with the result:

– 255 out of 1074 (23%) voters voted in the student district (of which 2 abstained), the candidates received the following number of votes (ordered by votes) with the result:

Congratulations to Professor Hlaváč and all the other elected academic and student representatives!

You can find more detailed information about elections to the AS of CTU on the website of the Masaryk Institute of Higher Studies of CTU.

You can find more detailed information about the Academic Senate of CTU HERE.

Prof. Václav Hlaváč is an unmissable personality in our scientific community, and he cares a lot about the  future of CTU. He is the Head of the machine perception and robotics department at our institute. In addition to his research activities, he also lectures at FEL, FS and FBMI on computer vision, machine learning and autonomous robotics. He was a member of the CTU AS in 2002 – 2007 and 2016 – 2022. He leads the committee for development and quality of the CTU AS. Not only is he actively involved in the activities of AS CTU, organizing exchange internships for master’s and doctoral students, he is also the organizer of Meetings with Music and other cultural and sports events.

The following contributions will tell you more about professor Hlaváč (in CZ language only):

How the robots dance – CTv Studio 6

Even a robot can adapt to the situation, think to a certain extent – interview for the HN