Home News Director of CIIRC CTU took part in ceremonious signature of a 15...

On September 24, 2019 in Brussels, Director of the Czech Institute of Informatics, Robotics and Cybernetics with the Czech Technical University (CIIRC CTU) Ondřej Velek and Director General of the European Comission Jean-Eric Paquet signed a document granting 15 million Euro funding for the establishment of the RICAIP Centre of Excellence.

Representatives of all fourteen selected projects supported by the Teaming Phase 2 of the Horizon 2020 Programme took part in the ceremonious signature of the symbolic certificates. Director General of the European Commission Jean-Eric Paquet used the occasion to emphasise that obtaining the funding is a proof of the exceptional value of each selected project as the European Union awarded finances only to every fifteenth project from the submitted applications that were all of high standard. He also stressed that it is necessary not only to start working hard on building new Centres of Excellence but to keep in mind from day one the centre’s self-sustainability after the financing period is over. Maximum possible level of self- sustainability is essential for the Centre’s fulfilment of its purpose.

“The purpose of the RICAIP project is to build a unique distributed research and experimental facility, a first of its kind in Europe, that will serve to develop and test innovative solutions for advanced and fully integrated industrial production that is continuously optimized based on the ever changing surroundings,” said CIIRC CTU’s Director Ondřej Velek describing the fundamental principles of the project. On behalf of CIIRC CTU which is the principal investigator and coordinator of the project as well as the three other partners of the project, which are CEITEC BUT and German institutes of DFKI and ZeMA, Velek made a commitment to create technologies that will bring all EU citizens new innovative products build exactly according to their specific requirements.

“Sustainability of such manufacturing is also supported by the vicinity of places of consumption to the places of production where products are made on universal and intelligent production lines in a short amount of time. The Czech Republic with its industrial tradition deserves to have such a Centre of Excellence with advanced production technologies here,” Velek said.

The RICAIP project has been officially launched during a ceremony that took place on Thursday September 26 at the CIIRC CTU headquarters in Prague. The event brought together over 150 distinguished guests including all involved investigators, representatives of the European Commission as well as state officials and representatives of universities, research institutions, trade organizations and significant industrial companies. 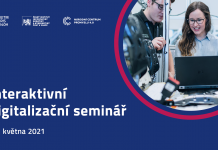