Two years later, after a forced „covid“ break, the F1tenth Autonomous Grand Prix competition took place. The races of self-driving cars in decimal size was held for the first time in Prague, as part of the international robotic conference IEEE / RSJ IROS, organized by the Czech Institute of Informatics, Robotics and Cybernetics (CIIRC CTU), as one of the accompanying programs. And the team from CIIRC and FEE CTU also took part, which took a great second place.

The F1tenth Autonomous Grand Prix competition was divided into two separate parts – a virtual competition, where teams competed from distance and a competition with physical participation. Both competitions were coordinated by a team from the Industrial Informatics Department CIIRC CTU. The organizers Michal Sojka and Jaroslav Klapálek were in the past part of the competing student teams, now they have tried the event from the other side of the organizer. The physical competition took place directly in the CIIRC CTU building and lasted for three days – two of them qualifying and the last one of the competition finals.

„The biggest unknown was whether the competition teams would arrive and the competition could take place,“ says Michal Sojka on behalf of the organizers. „Although some teams gave up at the last minute, the competition was still a great success. We were the first to have professional video transmission and automated timekeeping. The creators of the competition from the University of Pennsylvania have already told us that they would like to work with us to maintain such a high standard in future years as well.“

The Austrian Scruderia Segfault team took first place, the CIIRC CTU – Ředkvičky team second and the HiPeRT Modena team from Italy placed third. In the past, the team from CIIRC CTU brought bronze from competitions in New York and Turin and gold from Porto.

The Czech team was attended by students – Michaela Cihlářová, Jakub Hortenský, Martin Endler, Tomáš Nagy. The control of autonomous formulas is based on algorithms and their correct programming is much more important for winning the competition than the design of the car, which is prescribed for all teams.

„We had algorithms in place for planning and tracking the optimal trajectory. However, the race track was more complicated than we expected and the localization did not work well for us. So we had to move to more reliable but less powerful algorithms. Fortunately, the other teams had similar problems, so they also ran slower than during the qualification,“ commented Michaela Cihlářová and Tomáš Nagy on behalf of the Czech team. 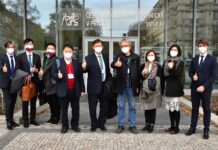 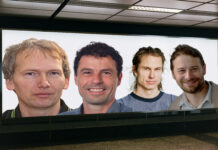 CIIRC CTU has the ambition to significantly advance the research of... 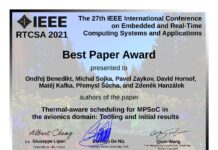 The Best Paper from RTCSA conference awarded to a team of...