Home News Milltown - vision of the city of the future

The lost city of the future

The unique project, the concept of the city of the future in the area of Milovice – Boží Dar, which could have placed the Czech Republic on the map of developed Europe, was ceased by a change in the leadership of the Central Bohemian Region.

The new councillors did not give the project of the European format of Miltown – a vision for the new Milovice, which could have significantly rehabilitated the reputation of the area having a very bad past, a chance for presentation. The urban-architectural project, which has no equivalent in the modern history of urban development in our country, was damned before it could be presented to the general public. The vision of the Central Bohemian Region on the revitalization, of not only the former military area, was to be presented at last year’s MIPIM investor fair in Cannes by Ing. arch. Michal Postránecký, owner of the architectural studio GEN61 and founder and head of the Centre of the City of the Future CIIRC of Czech Technical University in Prague. However, the pandemic interrupted everything and the new leadership of the Central Bohemian Region ended the project. 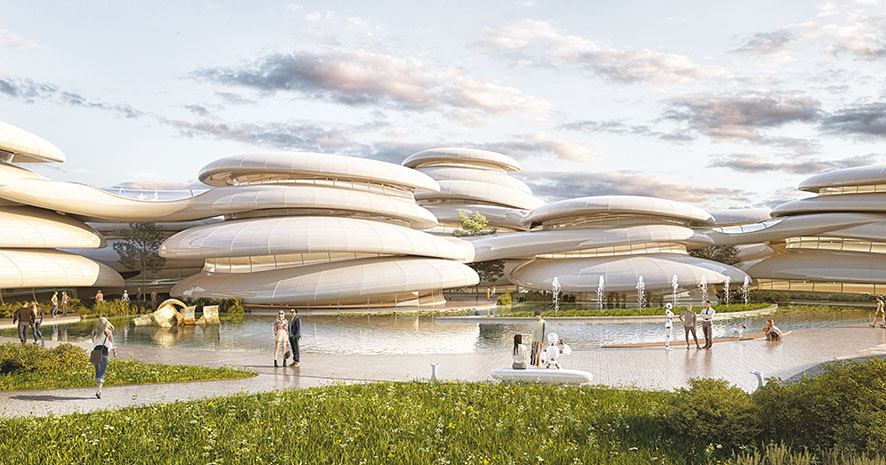 You were a member of a delegation led by the former Governor of the Central Bohemian Region, Jaroslava Pokorná Jermanová, who presented this project in Brussels…

In October 2018, I was invited by the then governor to present her idea of building a ‘city of the future’ in the Central Bohemian Region in Brussels within the framework of the European Week of Regions and Cities. For this purpose, they chose the Milovice – Boží Dar location, where all the plots were successfully consolidated and also owned by the region. All old buildings and other burdens that occurred there have basically already been removed from the affected area. It was decided that this completely unique brownfield will be used to build a new city system, not just a satellite hostel for Prague, but a fully-equipped city with a DNA trace of a naturally growing urban system, which will become a model laboratory for cities of the future. Resilient cities, where innovative technologies help not only to build the city, but also to manage, maintain, further develop and manage the city. It was supposed to be a city founded for the millennials and their followers, at the same time being open and friendly to other generations. A modern, dynamic city that will be economically self-sufficient and a leader in relation to the environment.

Who took on this challenge to develop the above described concept? 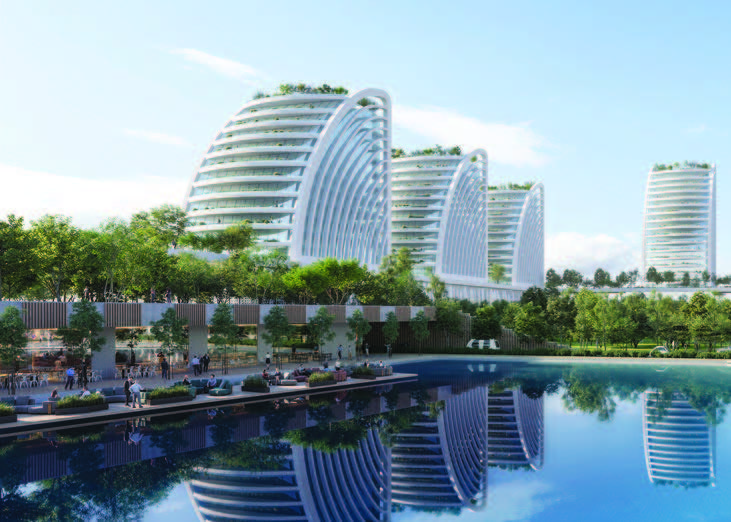 Who was to pay for the realization of this vision?

The state would participate in the form of an initial investment in utilities and a new railway, the so-called Všejanská spojka, which, once completed, will allow a journey between Masaryk Railway Station in Prague and Milovice within 25 minutes. Support for the project from various EU funds was also envisaged. The main financial support for the construction of the individual parts of the city was to be provided via a fund of qualified foreign and possibly local investors. Due to interest in the attention of foreign investors, we were to present the project at the international trade fair MIPIM in Cannes in April 2020. It was assumed that the preparation and implementation of the project would be managed with aid from foreign specialists having long-term experience with similarly important investment units throughout the world. I had the opportunity to consult the whole concept with one of them during its preparation and without any obligation.

Is there a variant with maintaining the airport?

The area of the former military airport should largely serve as a test polygon for autonomously controlled vehicles. A contract was therefore signed with Valeo shortly after the current management of the Central Bohemian Region took office. Efforts to restore airport operations sometimes emerge from somewhere, but objectively I think that this will never happen again if some fundamental preconditions for this use do not arise. 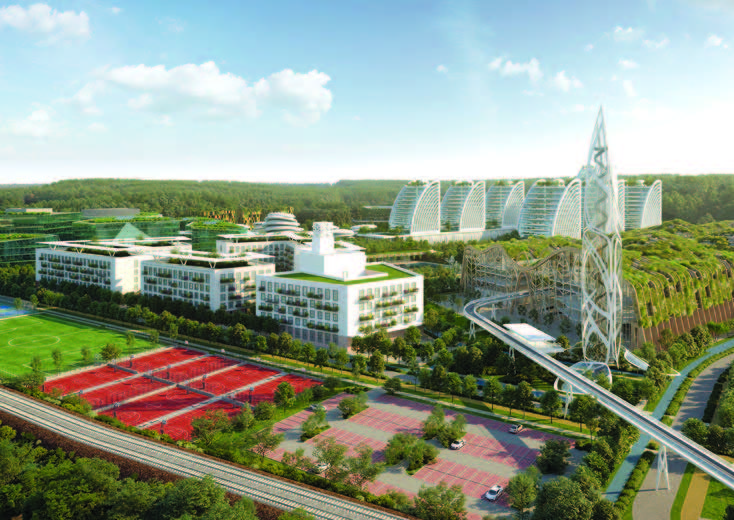 What time horizon was envisaged for the implementation of the project?

The whole process would be divided into several stages, one of which is the Všejanská spojka, which will greatly affect the development of the area. This could be completed by 2030. The first stage for the realization of the town of Miltown was intended, in the part of the area north of the future Všejanská spojka, the second stage following its completion, i.e. within the vicinity of the future station and further between the railway and the airport. However, even here there can emerge a part of the city centre known as Centennials Town, including residential buildings for students available already during the first stage. In the same way, it is possible to implement part of the project, at any time, south of the former airport, where the concept envisages a zone of autonomous “factories” with minimal service with regards to their operation, and a data centre, etc.

The new town of Miltown is designed as a green town, where clever innovative technologies support the optimal functionality of its technical infrastructure and logistics processes inside the whole town area as well as outside the town, towards the outskirts, the movement of people and products and its residents and visitors’ everyday activities.

The town is designed for all generations. At its heart will be a university community concentrated within a building called the Green Hills. A new form of international educational institution located in the premises of the Mall of Knowledge building, in which there will be several European universities of various specializations, which will cooperate on this project. They will share common facilities and services and libraries, laboratories, lecture halls, as well as spaces for relaxation, refreshments and micro-sleep capsules. The mix of university students from different fields of study is also intended to contribute to the blending of knowledge and to interdisciplinary cooperation. Research institutes located within its immediate vicinity will offer a direct connection to the production sphere focused on innovations, for instance within the framework of the so-called Concept 4.0 supported by robotics and artificial intelligence. Most of the town will be specifically subordinated to a significant share of the young generation. This will include all the elements needed for a town of 15,000–30,000 inhabitants and the prospect of further development. 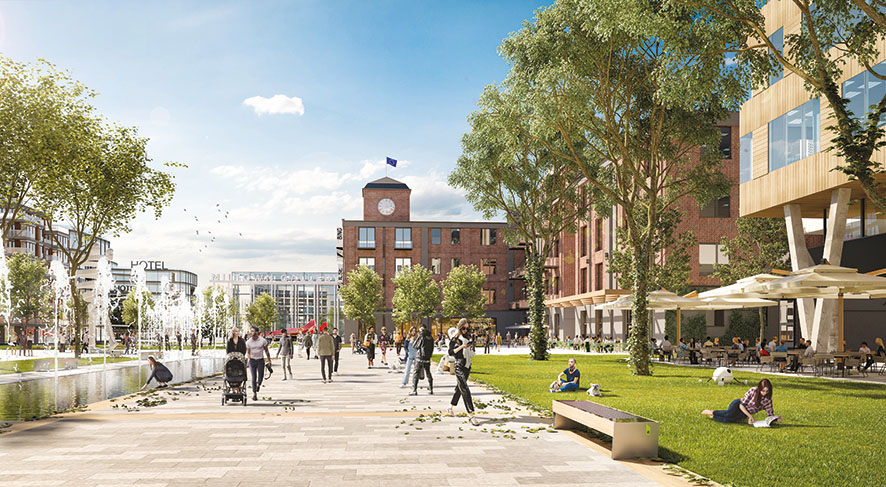 When designing its physical structure, care was taken to integrate as many water areas as possible into one water management system. Low impact development principles will be applied for surface water capture and treatment.

The open space of the town will be planted with a maximum amount of greenery, including its application to the facades and parts of the roofs of the individual buildings. As it is an experimental urban laboratory, they expect to use a variety of clean energy sources, such as photovoltaic panels and mini-wind turbines, hydrogen and other sources of the future, such as a modular microreactor. Different energy storage systems will be used here. There are also greenhouses and a vertical farm, which together form an important element of the concept of agrarian urbanism within the urban system.

Fundamental attention is paid to the waste management system, from the minimization of waste production to the maximum recycling of locally produced waste.

Application of the concept of urban resilience

An essential condition was to design the entire urban system within the maximum degree of urban resilience in times of severe crises. These can not only cause a significant reduction in the functionality of individual subsystems of the overall infrastructure, but also the ability of the city management itself. It should also be prepared for the latest measures, such as the complete short- and medium-term closure to the outside world. Emphasis was also placed on the application of circular principles in all areas of urban systems with a focus on local self-sufficiency.

The energy grid, water and waste management systems, communication systems and logistics of movement within the urban system, will be capable of planned degradability with the provision of unconditional functions for survival and resolution of acute crisis situations such as energy and/or digital blackout and the pandemic. Certain parts and objects may temporarily change their function. An occasional tent city for open air events can be immediately transformed, for instance, into a supply and logistics complex or a field hospital with an ‘operating’ centre temporarily set up in the Experimental Rehabilitation Clinic, which also serves as a hospital for the most complicated cases. Refrigerated objects can be immediately reserved and designated for storing the remains of deceased people or animals. Part of the area of the former airport can serve as a runway for small aircraft and the creation of an air bridge for connection with the outside world. A monorail with fully autonomous operation connects the main sets of buildings in the town and can distribute materials and products, as well as people in a secure mode. A section of integrated public transport on the surface is proposed the same way and is, once again, arranged via autonomously controlled vehicles. The local drone system can be used for the speedy contactless delivery of smaller consignments not only within the town’s territory but also from beyond its borders.

Experimental greenhouses and a vertical farm will help produce a sufficient volume of a certain type of food for the whole town for the necessary period of lockdown.

An essential assumption is that from the establishment of the city throughout its existence, attention will be paid to the continuous education of permanent and temporary residents in the field of community-wide resilience. All parts of the individual subsystems of the entire town will be continuously maintained in optimal readiness and modernized as necessary.