ČVUT CIIRC
Home News The success of the CTU team under the leadership of Jan Šedivý... 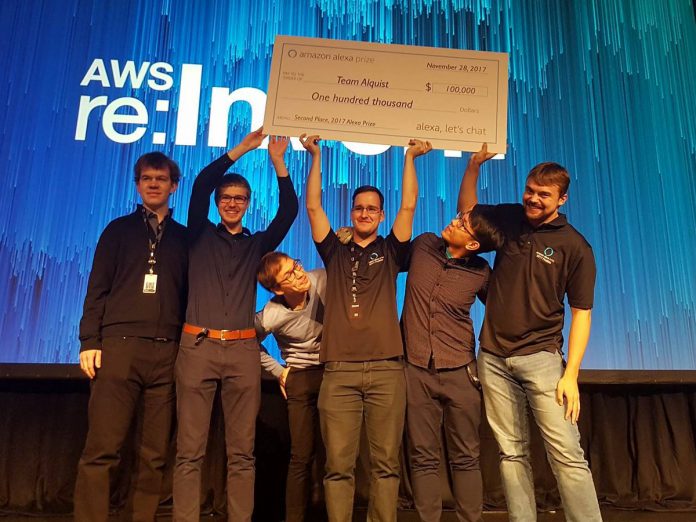 Students from CTU, led by Jan Šedivý, participated in the final of The Alexa Prize. The goal was to develop the best chatbot working with the smart Amazon Echo device.

The announcement of the absolute winner was held on 28.11.2017 at the traditional technical conference of the Amazon named re:INVENT in Las Vegas. The Czech team will bring home the second prize and $ 100,000.

This great success is the result of the year-round hard work of a group of six students (Long Hoang Nguyen, Jan Pichl, Martin Matulík, Jakub Konrád, Petr Marek and Ondra Hrách) led by Jan Šedivý (Czech Institute of Informatics, Robotics and Cybernetics), who developed the Alquist chatbot, which can answer questions and lead a meaningful conversation.

The Czech chatbot called Alquist has reached the finals among the three best in the world. In the final, he competed with the Sounding Board from the University of Washington (which won the first place) and the What’s Up chatbot from Heriot-Watt University in Scotland (which took the third place). The advancing to the finals was a significant success as they competed with prestigious schools such as Princeton, Carnegie Mellon and the University of California in Berkeley. In total, Amazon received over one hundred applications from the best schools in the world.

The previous round started this spring, with twelve university teams in it. Thanks to this, CTU received $ 100,000, which made it possible to properly develop the Alquist.

Czech chatbot during the competition received the highest average rating. Digital assistants were tested directly by Amazon customers who use Alex. They chatted with chatbots and then evaluated them. There were several criterias for evaluation.