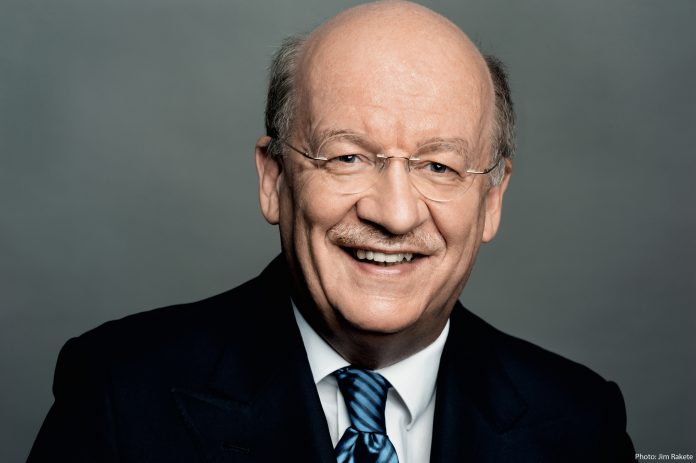 Prof. Wolfgang Wahlster, professor of artificial intelligence at Saarland University and founding father and CEA of DFKI, Germany, will be awarded an honorary degree Doctor Honoris Causa. The ceremonial assembly will take place on January 21, 2020 at 10 a.m. in the Bethlehem Chapel.

Prof. Wolfgang Wahlster has always been a big supporter of Czech science. He personally helped to integrate the Czech AI researchers into the European community through the European Coordination Committee on AI and helped to network the Czech AI researchers worldwide in early 90’s. Wolfgang Wahlster has always strongly supported CTU and especially CIIRC CTU since its very beginning and established here fruitful cooperation with one of the most renowned AI institutions – DFKI. He has helped to create the Czech Industry 4.0 concept. He has been instrumental in involving the Czech research community into such large EU project like RICAIP (part of the Teaming Programme).

Wolfgang Wahlster is a world-renowned scientist in the field of Computer Science, especially in Artificial Intelligence, and a scientific god-father of Industry 4.0. Wolfgang Wahlster graduated from University of Hamburg achieving there both the diploma degree and the doctorate in Computer Science/Theoretical Linguistics and Computer Science, respectively. Since 1984 he has acted as a Tenured Full Professor of Computer Science at Saarland University, Chair of Artificial Intelligence, Saarbrucken. Prof. Wahlster was a founder of the German Research Center for AI (DFKI) in 1988 and has helped substantially to its growth as its director and CEO during the past 31 years – DFKI became the world’s largest non-profit AI research centre with more than 1 000 researchers. Since 2019 he has been acting as a DFKI Chief Executive Advisor.

Wolfgang Wahlster has pioneered entirely new fields at the cross-section of Computer Science, Manufacturing Science and the Internet of Things like semantic object memories – digital product twins, the cyber-physical production architecture and hybrid teams of robots and workers for the industry of the future.  He called this revolutionary vision Industrie 4.0. Prof. Wahlster’s research results in Industrie 4.0 do represent a breakthrough in the concepts of industry of the future. His pioneering use of AI-based manufacturing in Industrie 4.0 paved the way to the synergistic collaboration between humans and robots in smart factories for mass customization. These visions are helping to change the way of thinking in industry, transportation, smart cities, energy distribution etc. and can be considered an important step towards the change of thinking needed for the Society of the future (Society 4.0).

In his various top advisory roles to the German government as a Partner for Innovation for Chancellors Dr. Schroder and Dr. Merkel, Prof. Wahlster has defined and shaped many large-scale and long-term national research programs between academia and industry. He was the academic Chair of the ISTAG group, which designed the European Institute for Innovation and Technology (EIT), with a strong emphasis on applied AI research like smart spaces, intelligent in-car interfaces, AI for smart grids and cyber-physical systems in EIT Digital. Since its inception, Prof. Wahlster is on the Executive Steering Board (ESB) of EIT Digital. In addition, he is currently serving as the scientific chair of the advisory board for the of the largest ICT funding program of the European Commission called Future Internet PPP and the strategic director of the BIG DATA Public Private Partnership of the European Commission.

In 2006, he was awarded the Federal Cross of Merit, First Class, the Officer‘s Cross of the Order of Merit of the Federal Republic of Germany for his outstanding contributions to human-technology interaction. In 2019, the President of Germany awarded him the Great Cross of Merit. Also, he was named one of the 10 most influential figures in history of AI in Germany by National Society for Informatics.

Wolfgang Wahlster is being awarded the honorary title Doctor Honoris Causa for his outstanding world-class research results in the areas of Artificial Intelligence and Industry 4.0, for long-term research cooperation with CTU in Prague and for eminent inspiration and support provided to the Czech Industry 4.0 Initiative. CURRICULUM VITAE

J. Lískovec: Industry 4.0 Brings New Opportunities. However, We are Just...